How cool is this? I get to embed the whole thing I’m reviewing! This is the Future, people; the Future where Wil Wheaton and Felicia Day quietly found an empire of web-based televisual entertainment and gradually go from indie success to global monopoly.

For those who have never heard of TableTop, let me explain:

TableTop is one of the major outputs of a new YouTube Channel Geek & Sundry. Geek & Sundry is produced by Felicia Day, Kim Evey, and Sheri Bryant. Felicia Day is the creator of The Guild, actor, writer, singer, star of Dr Horrible’s Sing-Along-Blog, all round geek superstar, and one-woman-powerhouse of creativity. Kim Evey co-produces The Guild along with other web-series like the Gorgeous Tiny Chicken Machine Show. Sheri Bryant is a television and film producer who worked with Felicia on Rock Jocks, which is to be released this year. 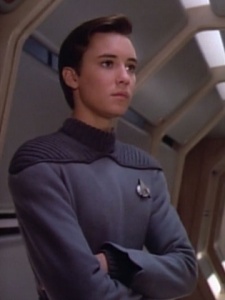 Felicia is a tower of geek momentum, and this has been augmented by the addition of Wil Wheaton. Wil Wheaton has long been known in geekdom for his role as Wesley Crusher in Star Trek: The Next Generation. The character was divisive as many loathed him for being too much of a ‘boy wonder’ – too intelligent, too privileged, too much of a goody-two-shoes (until he wasn’t) – but also loved by others. Personally, as a fairly intelligent child ostracised by my peers, this kind of super-intelligent fantasy of success was a comfort and a motivation. And I’ve never really understood what’s so bad about characters who Do the Right Thing. Anyway, although Wil wore the role of Wesley Crusher around his shoulders like an albatross for a while, he has resurged with the advent of social media, showing that a great many fans still have an affection for his Star Trek role, and winning over many more with his unabashed enthusiasm for all geekery. Like Felicia, he’s also cameo’d on numerous geek-related shows (including Numb3rs and Leverage) and has recurring roles on Eureka, The Guild, and most famously on The Big Bang Theory, where he guest stars as an evil version of himself. The collective Geek Icon weight of this project is thus pretty staggering.

TableTop is Wil Wheaton’s project on Geek & Sundry. It’s a weekly show in which Wil invites his geek-star friends round to play various table-top games. Viewers are introduced to potentially entertaining games, the rules are described in an easily digestible manner, and we watch the highlights of game-play over the course of the half hour program.

I wanted to like this more than I actually did. I mentioned in this year’s Serene Wombles my intention to watch and review more web-series, as I’m convinced it’s an exciting time for this burgeoning genre and the chances are good that a lot of interesting stuff will start coming out this year. The ambitious launch of a project like Geek & Sundry feels like a real game-changer. I like the people involved and I respect their work elsewhere. I want it to be a success, and when I see people referencing it it’s always amusing. I had to give it a go, and I wanted to like it.

I like board games, but I never really enjoy learning new ones as I’m never quite comfortable internalising rules and potentially making mistakes in front of others. I’m also very competitive and like being ‘helped’ even less. So this might have been a very good format for me to familiarise myself with the games in the comfort and private of my own home. The reality was a bit too much feeling bored and confused about rules in my entertainment. I thought the explanations were largely concise and effective, with a slick presentation, I just don’t find having the rules of a game explained to me all that much fun.

Similarly, watching other people play a game isn’t that entertaining. Even awesome geeky people. At the end of the day it’s still a bit too much like watching someone else play Mario – it looks fun and all, but it’d be a lot more fun if it were you collecting the coins and spacking the monsters.

And the game in this episode did look fun. Like a modern day, more expensive version of Maul of America – a zombie game in which one person plays the zombies and everyone else plays people trying to collect certain essential survival goods before escaping the mall in which they are trapped. Last Night on Earth is a game where two people play the zombies and two people play various characters trying to collect keys and gasoline before making their way to the truck and escaping town. A potentially less unbalanced game, but without the punning wit and reference to the familiar theme of zombie movies where the zombies parallel shoppers pacified by consumerism. The stereotypes of the characters on the cards were a little amusing, but they were also disappointing. Most of the characters you could play seemed to be male, and the one girl character has less hit points than everyone else. Yes, it reflects most zombie movies, but as a woman you don’t really want to be constantly forced to play at a disadvantage when you play your own gender. I get enough of that in RL, thanks.

With these thoughts in mind, I thought it was a shame that there wasn’t more critique of the game – good or bad. It’s entirely plausible that Wil and company have never played Maul of America, but one assumes they have played other zombie-board games (Cheapass games have an excellent array), it might have been nice to have some comparisons. Instead we were mostly treated to watching Wil and his cool friends having fun, from which I mostly came away feeling ‘Wow, Wil and his friends seem very cool, I wish I knew them. Then I would know Wil Wheaton and Felicia Day, and we could have fun antics like that. Sigh. I wish I were cool’ instead of, say ‘Wow! That looks like an excellent and very playable game – I will recommend it to my friends!’

Don’t get me wrong, Wil and friends did seem particularly cool people, and I really appreciated the rare opportunity to watch a show where the host is a guy and he’s still outnumbered by women. Funny women. Comic actors and comediennes. British panel shows take note. Felicia was hilarious with her random obsession with a zombie she named Dr Hanna, engaging in the sort of silly antics that also tickle me when playing games that are not really intended for role-play. I understand that several twitter accounts have already been created for Dr Hanna (I only found one, but whatevs). I was also impressed by Riki Lindhome, who I didn’t realise was such a geek or such a funny lady. I have also been introduced to Kate Micucci, who performs with her in their musical comedy double-act, Garfunkel and Oates.

As a way of raising the profile of awesome indie creators (especially under-represented ones like women), this seems awesome. And Geek & Sundry’s stated aim is to build a community and create connections with their audience along shared interests. In this vein, TableTop seems to be doing an excellent job. I was prompted to go watch this episode because Felicia Day tweeted about the Dr Hanna twitter accounts, and after watching it I went and checked out Garfunkel and Oates. It’s just that the show itself didn’t really leave me wanting to come back for more.

It might be that TableTop would have a bigger appeal to some of the entrenched board game gamers of my acquaintance. It certainly seems like a good way to get to know new and different games. However, my friends who are really into board games also tend to be really into game mechanics, and beyond outlining the rules there wasn’t really the in-depth discussion that I think would draw them in.

It’s an interesting idea, it might be worth your time, if you’re really into gaming and you enjoy watching cool people have fun, but it isn’t quite doing it for me. Nevertheless, it’s a professional looking but still quirky production, and it does make me want to come back to see what else Geek & Sundry has to offer.

I'm a writer of science fiction and fantasy short stories, as well as many, many unfinished novels. I review things of a generally speculative nature. This is my blog for writing and reviewing.
View all posts by Serenity Womble →
This entry was posted in Geeky & Sundry, Review, TableTop, Web series and tagged board games, felicia day, gaming, Geek & Sundry, geek culture, TableTop, web series, Wil Wheaton. Bookmark the permalink.