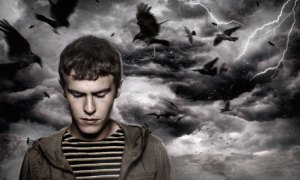 I wasn’t sure about The Fades at first. It was interesting and lively, but also a little bleak and slow. I often find it difficult to get into things closer to the horror end of the spectrum. It’s not that I don’t like horror, it’s just that I don’t scare easily, and the more familiar the horror tropes employed, the more likely I am to get bored simply because the fear-factor isn’t stepping in to maintain my interest. I more often enjoy horror in company – I find it easier to buy into the suspense when other people are doing so, too. So it’s not entirely The Fades‘ fault that I was not immediately gripped.

Even so, there was enough to pique my curiosity, and with other friends starting to get into it, too, I was persuaded to keep watching. And I’m glad I did.

The ‘fades’ are spectres of the dead that have failed to ‘ascend’. Usually a spirit will hang around for a bit, then, when the right moment comes, they’ll go to an ascension gateway, and if they’re lucky they’ll go on to… whatever’s next. If they’re unlucky they’ll stay in this world, having to watch their friends and loved ones getting on with their lives, unable to communicate with them or touch them, slowly going mad. So far, so ordinary ghost story.

The ‘angelics’ are human beings who can see the fades. They also have other powers, in various ranges of efficacy. Healing seems prominent. It usually involves the healer disgorging insects afterwards. We start the story with the angelics finding themselves hunted by something new that is emerging amongst the fades. This new sort of fade can affect the physical world, apparently as a result of consuming human flesh. So, we have ghosts and zombies and hunter-slayers.

Enter Paul (Iain de Caestecker) and his friend Mac (Daniel Kaluuya). They’re teenagers (16/17ish), on the geeky/unpopular end of the social spectrum, at stark contrast with Paul’s twin sister, Sarah (Natalie Dormer), who’s the typical popular-bitch style girl. Mac hopelessly fancies her – I’m not sure why, he’s much cooler than her. Paul, on the other hand, fancies Sarah’s friend, the more indie/quirky Jay (Sophie Wu). Anyway, Mac, in his role as the funny, geeky friend, persuades Paul to enter an abandoned building looking for things to use in a homemade zombie movie for set dressing. Whilst there, Paul runs across an angelic, Neil (Johnny Harris) chasing the fade that’s turning into a zombie-thing. Neil realises that Paul can see the fade, and is therefore an angelic himself.

It becomes steadily obvious that Paul is no ordinary angelic, but something very special. Neil tries to persuade him to leave his family and friends and embrace his angelic nature, as sooner or later he’ll only put those he loves in danger. But Paul’s still a teenager, dealing with teenage things, and he’s not ready to do that yet. Meanwhile, he continues to receive visions of a blasted future, whilst discovering more about himself and his powers, which increasingly interfere with his attempt to live a normal life.

This was described to me as something highly original, and it didn’t immediately strike me as such. It’s a pretty typical chosen-one set up. It could very nearly be Buffy. Granted, it has a washed-out, grey, Brit-indie thing going down, but in that regard it’s just the standard British grim-take on a genre that has been dominated by more brightly-coloured and optimistic American imports. Misfits was fairly original in this take, but The Fades is simply taking the same Brit style and applying it to a more horror-centric, Buffy-style premise.

None of which is to deny that what it does is interesting and well-made. I find the names ‘angelic’ and ‘fades’ somewhat jarring. I don’t understand why they wouldn’t just call the fades ‘ghosts’, bearing in mind that their unusual zombie characteristics are a decidedly recent thing. ‘Angelic’ on the other hand, seems a little too on the nose for the grey-realism style of the show. Besides that, though, the writing is excellent, especially for the funny-geek friend, Mac. Yes, it’s a stereotype of the genre, but it’s very well done. He’s a lively joy to watch, and, after all, geek people watching a geek program love a well-deployed geek reference. It plays well to the audience without losing the authenticity of the character. This is thoroughly believable teenage humour as well as enjoyable witticism for the viewer.

The casting is excellent. The protagonist may be a white male, but his best friend is a black guy and the object of his affections is asian. Of course, the funny black friend is a bit of a stereotype, but at no time do I feel like Mac is meant to be funny because he is black, and the effect is to some extent balanced out by his severe, police-detective father, who believably commands respect. Mac is in no sense token. His awkward relationship with his distant father adds not only poignancy to the humour and enthusiasm with which he usually approaches life, but rounds out the character, making it clear that his significance is not solely based around his relationship to the lead white male. Daniel Kaluuya is to be strongly commended for such a nuanced portrayal of a character that could have been very one-dimensional in the wrong hands. Writing and acting come together beautifully, here.

Paul himself is interesting. He is neither conventionally handsome nor otherwise striking in appearance. He is always presented in washed out clothes, and rarely steps forward to take command of the scenes he is in. He’s very much the gawky teenager, and not the Hollywood-homely of the usual TV social outcasts. Which, I hasten to add, is not to malign the appearance of the actor himself; rather, it’s to praise the fact that he does look like a normal, gawky teenager, both in terms of his looks, his wardrobe, and how he carries himself. I never met a mid-to-lower tier social-outcast like Buffy was supposed to be who could convincingly sashay into a room like Sarah Michelle Geller.

I’m also loving the range of roles offered to women. Everything from the striking and commanding presence of the priest, Helen (Daniela Nardini), to the popular-bitch, Sarah, and the waif-like, timid fade, Natalie (Jenn Murray). I’m particularly in love with Paul’s mother, Meg (Claire Rushbrook). It’s very easy for the mother of a ‘chosen one’ to fit into a familiar role that fades into the background and requires little colour for itself. Buffy’s mother, Joyce Summers, initially presents just such a character, but blossoms into something much more interesting in the her later seasons. Meg is wonderful and understated as a woman who is dealing with two volatile and complicated teenage children on her own and often times doesn’t know what to do. This is not to criticise the character, her light-touch respect for her children as people is deeply endearing and very sensible, even though one senses her quiet despair that there is obviously something going on with her son that she doesn’t know how to help with. The hint that she perhaps neglects her daughter in her concern for Paul is very much an aspect of a rich character, rather than the familiar outsider-critique on motherhood that is so common in television shows that deal with family dysfunction. The issues of this family are not, in fact, insurmountable, and had Paul not turned out to be an angelic they probably would have resolved themselves in the natural course in the ways such things usually go in real life.

The thing that really hooked me, though, is The Fades‘ continuing efforts to up-the-ante of weird each week. Somehow events keep getting stranger and stranger, and yet the writing, if anything, improves. Four episodes in and we have not embarked on the painful implausibility such spiraling strangeness so often invites. It’s only getting richer, drawing its threads together as the strangeness grows, rather than fragmenting into a sprawling mess.

That’s why, at this point, I decided it was time to review and recommend this to you all. The Fades: watch it. All the episodes are still on iPlayer, for your catch-up leisure, and will be available until 2nd November 2011. Next episode airs at 10pm, Wednesday, BBC3.

I'm a writer of science fiction and fantasy short stories, as well as many, many unfinished novels. I review things of a generally speculative nature. This is my blog for writing and reviewing.
View all posts by Serenity Womble →
This entry was posted in Review, The Fades and tagged fantasy, horror, review, The Fades. Bookmark the permalink.

6 Responses to Review: The Fades, Episodes 1-4