Doctor Who, The Almost People 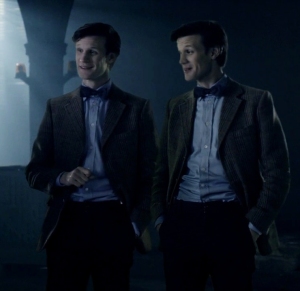 The Doctor and his 'ganger'.

This is part two to the story that began with ‘The Rebel Flesh’ last week. Apparently it’s also the penultimate episode – before the midseries break, that is. I had no idea there was going to be such a thing, and I must confess agreement with the rest of my twitterfeed that’s it’s a bizarre and probably mistaken choice. At a time when TV is largely so barren, I’ve been treasuring my weekly Doctor Who fix. Alas, it feels as though that’s about all I agree with the rest of the Internet on.

It’s been a weird half-season. I quite liked ‘The Curse of the Black Spot’ whilst it was otherwise generally reviled for making no sense. I enjoyed ‘The Doctor’s Wife’ but was utterly perplexed by the frequent assertions that it was the Best Episode Ever. And I thoroughly enjoyed this episode, feeling that it brought home a lot of promises and really upped the series’ game, where virtually everyone else seems to feel that it left too many unanswered questions. Lots of people have said that they are ‘losing their patience’ and that they feel Doctor Who will lose its casual watchers if it doesn’t resolve its plot soon.

I completely disagree. For years I, and others, have been lamenting the episodic structure of New Who. Where Old Who had story arcs that typically lasted between four and seven episodes, in New Who you were lucky if you got a two-parter. Whilst I’m not generally a fan of mid-season breaks, a seven part story actually feels like a perfectly natural thing for Doctor Who to do. Moreover, where Pertwee-style seven episode arcs could feel a bit long, the new version has incorporated self-contained plots that could be enjoyed perfectly independently of having to understand what the brief, unobtrusive flashes of something that Amy sees were about. To me, it feels like a nice balance, and I approve. Perhaps the negative reaction is just a natural resistance to change? I don’t know, it’s not my reaction, so it’s difficult to analyse.

As for the episode itself, it gave everything that ‘The Rebel Flesh’ promised but failed to deliver. Possibly a lot is owed to Matt Smith’s effortless charm as he swiftly confirms himself as one of my favourite Doctors. Where the general ‘ganger’ (doppelgänger) plots were predictable and uninteresting, the introduction of a ganger for the Doctor was utterly delightful. Smith clearly had a lot of fun with the role and it was a joy to watch. I’ve mentioned before that I enjoy doppelgänger as a concept. One of the joys for me of the Peter Davison era is that they employ this idea on four separate occasions in delightfully different ways (Kamelion, Omega, the Dalek duplicates, and Jek’s androids). But for all my Peter Davison love, the 45min format, the wonderful script, and Matt Smith’s acting left all of those behind.

I also enjoyed the subplot with the ganger of the guy who was a father. It was a really lovely, thoughtful touch. It was beautifully and believably played out in a gracefully understated manner. Mark Bonnar is to be commended. It’s also nice to see such a touching relationship with a father and son. If this plot had been envisioned 20 years ago, I am absolutely convinced that it would have been one of the women it went to – it would have been assumed that the women had families, and that their families would be more important to them than any concerns about the ongoing situation. In complementary fashion, Raquel Cassidy* is awesome as Cleaves, the strong female leader whose control issues can lead her to jump into a situation without thinking it through, and yet whose strength and self-confidence make her believably the one who would quickly affirm control of a situation and persuade others to follow her even if they weren’t sure she was right. I equally liked that the power struggle in this episode was between two women of opposing views… and that that power dynamic stays the same even after the positions of the two women have changed. Most of all, I love that all this is going on and no one once comments on the gender dynamics of the situation. It’s interesting for us watching a 21st Century TV program; for them, it’s just a part of life.

Perhaps the most shocking and problematic aspects of the episode occur towards the end, so please take this as a spoiler warning, because I can’t discuss them without giving some pretty big things away. What I’m talking about is the fact that Amy turns out to be a ganger, and the Doctor kills her in order to free the consciousness of the real Amy so that she can concentrate on her labour. This is the resolution of the pregnancy plot. It turns out that, having realised that he was getting mixed readings on Amy because her consciousness was that of a person who was pregnant whilst the body she was in was not, the Doctor visited a time when the ‘flesh’ (the stuff the gangers are made from) is being used so that he can analyse it and work out how to dissolve it. It just so happens that at the time of arrival a solar ‘tsunami’ causes the flesh to become self-aware and self-assertive.

What seems odd is that the whole of the last two episodes has been focused on a discussion of the rights the gangers have to be treated as real people. Having worked so hard to persuade Amy that his own ganger is real, he then destroys hers very casually – surely something is wrong? I was a bit shocked by this at the time, but, on reflection, it’s not as bad as it initially seems. First off: Amy was shielded from the solar tsunami by the TARDIS. Her flesh never became self-aware, it was just a vehicle for Amy’s consciousness. Moreover, the Doctor and his ganger make a point of the fact that the memories of gangers seem to survive the disolution of the flesh, so the ganger-Doctor may yet survive to take the Doctor’s place at his ‘death’. The fact that Amy’s ganger disolves may not be the ending of its life, merely its possession by Amy.

However, I doubt they’re going to start the next episode with the ganger as a new character on board the TARDIS, so I concede that that’s less likely. I think it makes more sense to regard this ganger as not self-aware. The Doctor clearly isn’t happy about having to dissolve it, but it’s not the same as killing a fully sentient being in order to save his friend. It is still a strange and grim use to put the sonic screwdriver to, but an understandable one, and I would argue and interesting rather than ‘unacceptable’ one.

Granted, it would have been nice to have some kind of explanation in the episode itself, but I don’t really think there was time. It would have destroyed the dramatic tension, and we are going to pick up the next episode exactly where we left off. Overall, I think fears that not enough questions are being answered this series are ungrounded. Personally, I think Matthew Graham is to be commended for creating a really cracking, interesting watch.

*Side note: in looking this up, I came to learn that Cassidy comes from the same town I grew up in. I did not expect to be reminded of that place this morning. Good on her for going on to more interesting things.

I'm a writer of science fiction and fantasy short stories, as well as many, many unfinished novels. I review things of a generally speculative nature. This is my blog for writing and reviewing.
View all posts by Serenity Womble →
This entry was posted in Doctor Who, Review. Bookmark the permalink.

9 Responses to Doctor Who, The Almost People